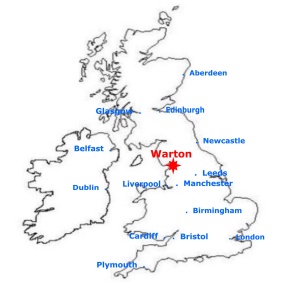 Warton, the centre of the United Kingdom (almost!)

Rail Access to Warton
Carnforth station is the closest stop on the railway to Warton (1.5 miles). Carnforth stands on the Barrow - Leeds line. It is reached from London and the south, and Scotland and the north, via the West Coast Main Line changing at Lancaster. There are also direct trains between Carnforth and Manchester giving easy access to the airport.